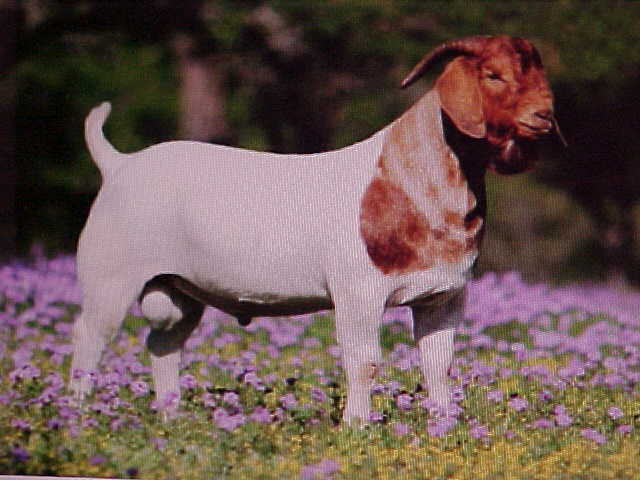 CIRCLE R is proud to have bred or shown so many Ennobled Goats, the highest honor in the American Boer Goat Association, and even more proud to say from ALL NATURALLY BRED offspring, which is doubly rewarding and proves the  Quality  of the goats raised & shown from such a small herd.
Many of these older animals are part of the Cornerstone of what built the American Boer Goat Industry  and should be appreciated for what they were and what they have become 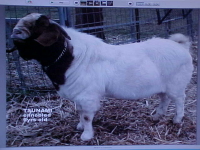 WEBSITE GLITCH ERASED THE PIX on goats below,, WORKING ON ADDING  them back.  REAL SOON.

Son of BULLDOG, What an incredible buck BIGDOG was & a Full Codi/Pci, we knew he and his brother were special the day they were born, both many times Champions in 6 states, and BigDog Overall Champion at Naile his last show, and the sire of Numerious Champions offspring, this is all a Great Buck is meant to be, just like his great sire  (deceased 2006) 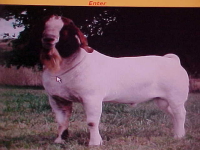 HUMMER ........was a game changer at Circle R, he arrived as a yearling with a NO HOLES pedigree, and started to mature into the great buck he is today, SEPT 2010 Hummer and his oldest daughters headed to the showring, and started winning almost everywhere they showed, Hummer was unbeaten in TX & several Northern States, ending his show carreer at the very  First American Royal in KC.
He is a great producing buck who's  claim to fame may yet still be to come with the great stock coming from his sons & daughters, several grand kids have already been Champions.

Dominator was a son of JOHAAN & was purchased as a kid  by me for Butch Patterson  (ashcreek) at the FIRST  Powell/Holman Labor day sale. Butch was on vacation and had said not to spend the farm but get a *goodun* and thats exactly what Dominator  turned out to be. Not a show buck but sure good enough breeding buck, for Butch myself Ken Pettit & then 50K & Blu Sky. Dominator was the sire of LONESTAR/AFRICAN STAR/LIL STAR all ennobled and many others that were sold and went to the show ring with success, including my JESSE JAMES & brother JAMAL  who was the buck that put Blue Ribbon in the showring.
I guess DOMINATOR was a *goodun*

Where do you start with this buck? He was First &  the biggest kid ever born out of SHARON TWO,  (full codi/pci) and was always referred to by Butch as the Bulldog kid, his mother was a big doe,  but he always looked so much like his grand sire KAPTEIN, when he was weaned i decided to register him with the name BULLDOG, never knowing what a phenomenon he was going to become...........he was barely 2 when he won Nationals, the winning offspring from him is far to many to list just about every State  including , & the Caribean, even Europe  but he will always be remembered for consistantly producing Single teated beautiful does, and it was a great honor when PURINA  picked BULLDOG to be there official Boer Goat on there feed bags, and there is never a Tractor Supply i go in that does not have a Purina banner hanging with his picture on it, i also  want to thank Purina for the hundreds of pictures they took of him to get that perfect shot.
BULLDOG  (full codi/pci) was just a goat when i got him and he will always be remembered as that around here, not the Super Sire he turned out to be, he is buried in his huge pen where he laid under the big tree every day. his grandaughters still here FORTUNE & MS KITTY.

Casey (rt) another full codi/pci  & was a huge winner in the showring, she  produced 2 big bucks as a yearling, by a LIL STAR son of OSCAR.  She was then 5th out of 136 at Nationals as a yearling, and then produced her best a single buck kid,  I named BUFFALO also out of a LIL STAR son by COWDOG, this was  a  MAJIC  cross for sure.
John Edwards placed Buffalo 1st out of 27 at 11 weeks old, which ennobled his mother. the plan was to take CASEY back to Nationals as a senior doe after her next kidding, something she did not survive after carrying 4 HUGE buck kids.  She will always be remembered for being the mother of BUFFALO & her first buck  EASY STREAK. 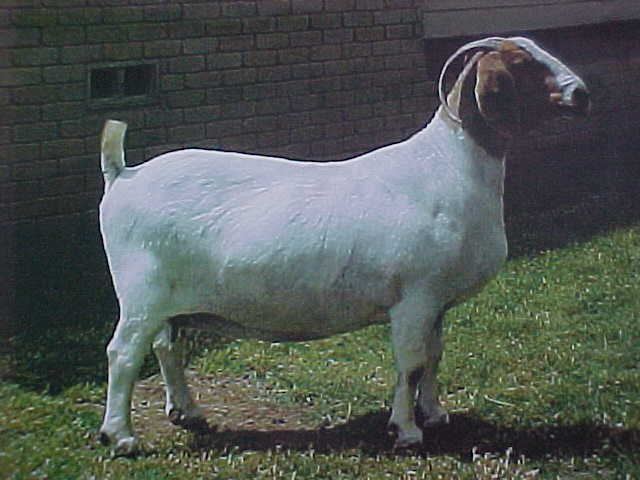 THE CODI QUEEN is the kind of doe that takes your breath away, and she upped the anti in the American Boer Goat World when crossed to the young BULLDOG, she produced like a dream 2 for the RECORD BOOKS BIGDOG & COWDOG, who swept the southern showrings.  QUEEN was shown at 2001  ABGA Nationals at a fairly old age, and passed inspection there by the South African judges who instantly recognised her as a codi/pci, that day she beat 3 previous National Champions and then went back home to the pasture. She was BIG & Thick and an outlaw, but you have to appreciate how many miles the doe had traveled in her life, and facilitys she had survived. She is buried at CIRCLE R where she was happy & productive. There is still a grandaughter here named MS KITTY.

LIL STAR was a daughter of DOMINATOR  and a prolific producer , like her great mother SHARON TWO (mother of Bulldog)  Lil Star has been bred to many different bucks and always produced Champions. LIL STAR started winning in 2000 and never looked back, she won at most of the Major Stock Shows several times, she loved to be in the showring, and many of her offspring have been Champion, she showed one more time at 2007 Nationals at 8 years old, lead by teenager  Dakota Ash.
LIL STAR is still alive and living at CIRCLE R in 2013, and is most noted for being the Grand mother of buck CIRCLE R BUFFALO.
OWNING LIL STAR i think is where i started to appreciate the POWER of the does, her MOTHER was a POWER doe, and so was she.

HOLLYWOOD is the son of two National Champions GUNSMOKE & ASH CREEK BRIGHTSTAR one of Butch's finest productions (maybe i should credit Butch for being a superior producer and i did not realize just how much of his theory rubbed off onto me) , HOLLYWOOD had a very impressive show career, and was a phenominal producer over the CIRCLE R CODI does, he had a LONG list of Champion sons & daughters in several states, including HOLLYWOOD HOTSHOT & HOLLYWOOD GOLD both Ennobled, he was a game changer at CIRCLE R, just like Butch told me he would be................THANK YOU GOATMAN!!!!
CIRCLE R NATIVE STAR

NATIVE STAR.......was a huge paint  son of LONE STAR out of KAY-9, he had a beautiful ennobled head so typical of his genetics, and a very very impressive show career in several states with 3 owners, he was born one of triplet bucks all Champions, and was a tremendous color producer, and a gentle giant which he also passed on.
NATIVE STAR was put down  2008 at the University of Virginia  after sustaining a neck injury.
NATIVE STAR  should have been the first ennobled paint goat had ABGA not changed the rules  on non traditinal color, then they changed them back, better late than never for Native Star.

CIRLCE R KAY-9 is a 1999 full codi/pci daughter of BULLDOG & TX LADY both ennobled, she is the sibling to K9-CASEY also Ennobled and like her sister had a distingushed show career, before raising triplet bucks as a yearling, she then went back to the show ring for a few more Major Awards including National Champion Meat goat doe, in 2004 Kay kidded naturally 5 babies which almost killed her. KAY is a big long, thick wide doe,with lots of bone, and a good ennobled head, and would have been ennobled many years earlier, had one of her first kids not been the paint buck Native Star. lost KAY 7/15/14.

This beautiful 1999 doe was a head turner from day one, she was a triplet sister to LONESTAR, sired by the Joaan son DOMINATOR out of the RMR doe 1009H.(super doe)
Nancy was as long as a bus with a gorgeous head,and a show ring dream she won many awards over many many years, and was a Powerhouse producer like her mother, and now her daughters & grand daughters, a nancy great Great G-daughter just won a huge yearling class a  2013 West Tx  Fair ...............Nancy will never be forgotten she was just plain special.
Yet another Butch picked for me!!!.

Lonestar was a unique individual with 10 straight GRAND CHAMPIONS back when there was 10  shows in a year, he is out of the same doe as NANCY ABOVE, and although HE  was lost young there was enough grand daughters of Lonestar to prove him, he has a daughter still living at Circle R  2014, who went half way around the world, and came home again 2009, & STILL ALIVE 2014.
BROOKS TEXAS LADY
LADY was another POWERHOUSE production doe, first producing KAY & CASEY then FIESTA/SPARKLE & MARDI GRAS all from the yearling buck Bulldog.
Lady was a daughter of the Traditional  import codi/pci PBL-JR who would always crop out a little color, and LADY did in MARDI GRAS  and a buck out of FIESTA, and a paint buck that died with Casey, these were all full Codi which came thru JR as color is a VERY RARE THING WITH CODI/PCI.
I AM A BIG BELIEVER IN DOE POWER, AND LADY WAS A POWER HOUSE DOE who produced a dynesty of powerful daughters, who's offspring are still part of the structure here.